A focussing tool for Astro-photography

The Bahtinov Mask is a very elegant solution to one of the biggest problems that besets the deep sky astro-photographer - focus! It is common practice to focus your camera (DSLR or astro-CCD) on a bright star as this star and the object you want to image will both be at infinity so getting the star in focus will ensure that the deep sky object will also be in focus. However, trying to do this with a DSLR is extremely difficult as the pentaprism viewfinder is designed for daytime use and even a 'bright' star appears dim in the viewfinder. Capturing an image and then looking at it on the camera's built in screen is a step in the right direction but you can still be easily fooled by the view. The latest DSLR cameras with 'liveview' functionality that displays a live view of the light falling on the sensor can help somewhat but this is still not an ideal solution. What is required is a more empirical approach.

Astro-CCDs have to be connected to a PC to work and the capture software can often be used to help with achieving focus by allowing you to view the captured images at high resolution on the monitor so that you can evaluate the quality of the focus. This is often augmented by the production of calculated representations of a star's focus quality using Full Width Half Density (FWHD) or Half Flux Density (HFD) - see explanations below. These two methods seek to provide an empirical method of achieving focus but because of changes in the 'seeing' between shots, they are not always easy to use.

The Bahtinov Mask invented by Pavel Bahtinov, a respected Russian astro-photographer, will work with both kinds of camera by producing a distinctive 'diffraction pattern' in a similar manner to the way a four vane secondary mirror spider vane on a Newtonian reflector produces a four pronged star and that of a three vaned spider vane produces a six pronged star. However, the unique design of the Bahtinov Mask produces a very bright image with a diffraction pattern forming a long cross comprised of two intersecting lines and a third line that moves across the centre of the cross as the telescope is adjusted in and out of focus. Correct focus is achieved when the centre line fits exactly in the centre of the cross as shown in the sample images below in Figure 1:- 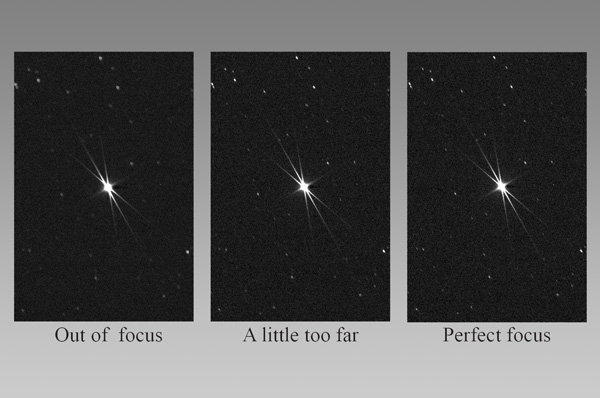 Using one of these masks attached to the front of your camera, accurate focus can be achieved using the built in screen of a DSLR camera or the captured image of an astro-CCD camera on a computer screen.

Pavel Bahtinov has kindly released his designs into the public domain so anyone with a little bit of DIY experience can make their own mask using the templates that can be downloaded from HERE. Bahtinov Masks are unique to each telescope so to generate your own template, you will need to enter three important pieces of information into the dialogue boxes, your telescope's focal length, aperture and outside diameter of the dew shield on a refractor or the outside diameter of the front of the telescope on a reflector.

There are other attributes that you can set before you generate the template and one in particular the 'Slot width override (mm)'   will determine the total number of  slots that will be generated. On my 80mm refractor, I felt that there were too many slots to I changed this value to 4mm as this would make the mask easier to make and increase its strength. Figure 2. shows the default template and Figure 3. shows my modified version.

Once you have downloaded your template which is produced in a file format known as Scalable Vector Graphics (SVG), you will need to import it into suitable graphics software like THE GIMP  before printing it out. You will then have to carefully cut out all the 'slots' and devise a method of attaching it to the front of your telescope for use when focussing. I have made several of these but Figure 4. shows my very first one and it can be seen that I made up a simple 'collar' to fit the dewshield of my telescope and sandwiched the 'tabs' that I incorporated into the edge of the mask between two collars made of cardboard and glued together.

If you are using a PC with either your DSLR or astro-CCD camera, there is now a really clever, free (although a donation as a thank you would no doubt be appreciated!) utility written by Niels Noordhoek, an engineer/scientist from the Netherlands that will add computer power to the recognition of the focus sweet-spot. I recommend that you visit Niel's website and download his software as it seems to work very well indeed. Once you have downloaded this software, a simple demonstration of its capabilities would be to try it out on each of the three test images in Figure 1. above as these will clearly show the analytical power of the software. An example of this is shown in Figure 5 which shows the tool being used on the out of  focus image in Figure 1 above.

FWHD is a numeric interpretation of the size of a star. This number comprises of two measurements; Full Width simply means that the full diameter of the star is used and Half Maximum is a measure of the distance from the centre of the star at which the brightness level decreases to half the level value at the centre.

HFD is the pixel diameter of a star in which half the energy of the star is contained. This value is similar to that of FWHM but is considered to be more reliable especially in conditions of poor seeing.